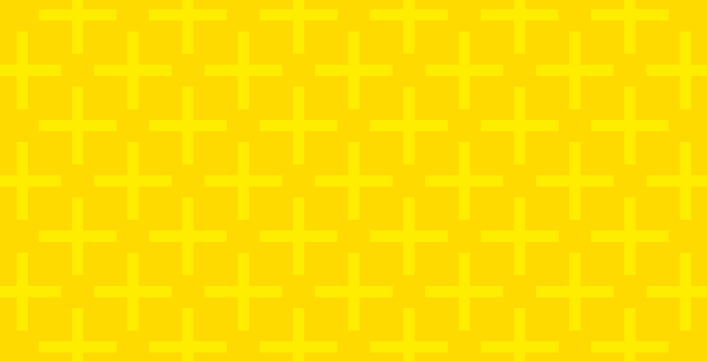 In this edition of the First-Time Homebuyer Market Report, we’ll take a look at the following dynamics from the fourth quarter of 2019:

Let’s dig into each of these topics a bit more…

1. The first-time homebuyer market was very active in Q4, finishing out another historically strong year. 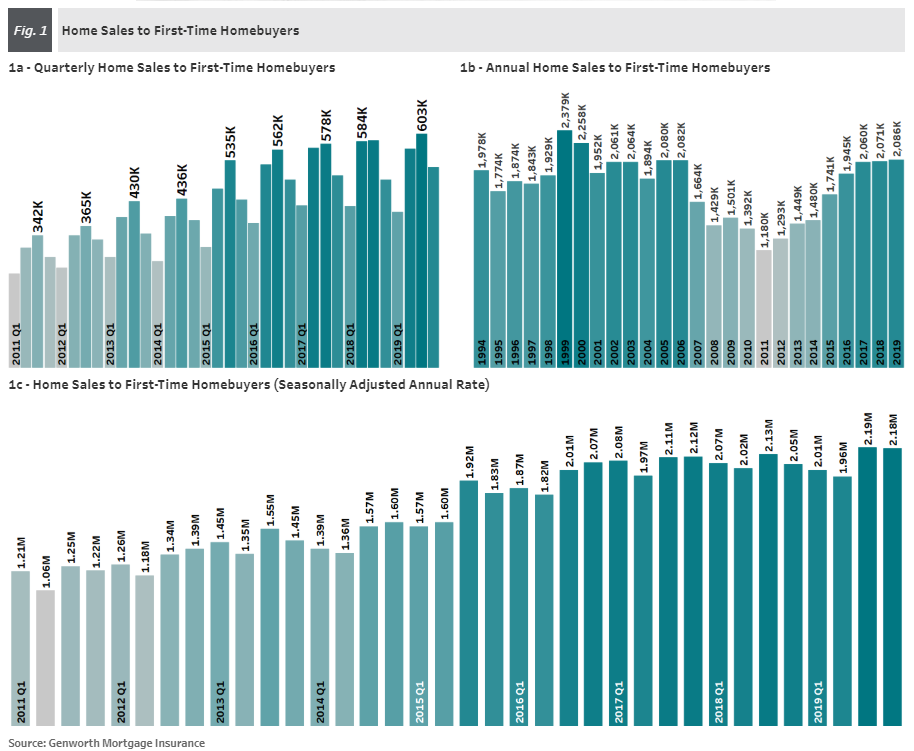 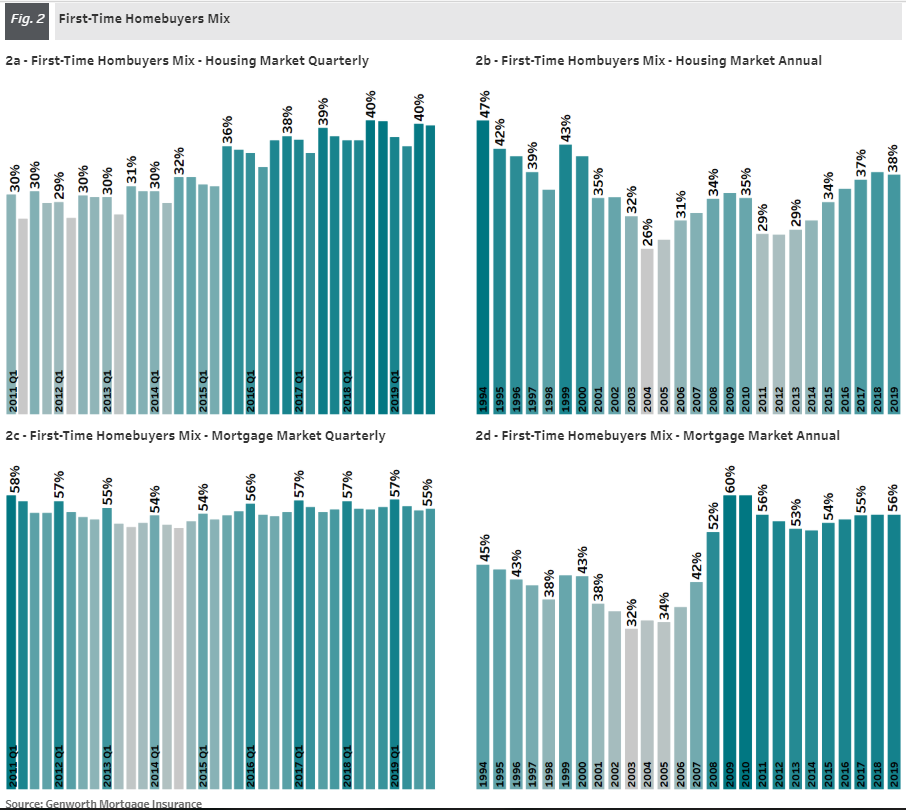 Demographics continue to be a positive factor for the first-time homebuyer market, but Millennials (like everyone else) are getting older, and that means their demand is expected to change.  The millennial generation includes people born between 1984 and 1996.  That means they are between the ages of 24 and 36 this year, with the peak of population at 29-30 (Figure 3).  In 2025, there will not be any Millennials under the age of 30, which means that the youngest millennials will be over 30 in the next five years, and the peak of this population will rise to 34-35.  The size of the 25-29 age cohort will shrink over the next five years, while the size of 30-44 age cohort will expand.  In fact, the center of the Millennial population has been shifting into their early-30s over the last 5 years and is expected to shift into late-30s and early-40s over the next 5 years.  The 40-44 age group should see the biggest population increase, with an increase of around 1.5 million.  The 35-39 age group also will see a big increase in population, with an increase of around 1 million. 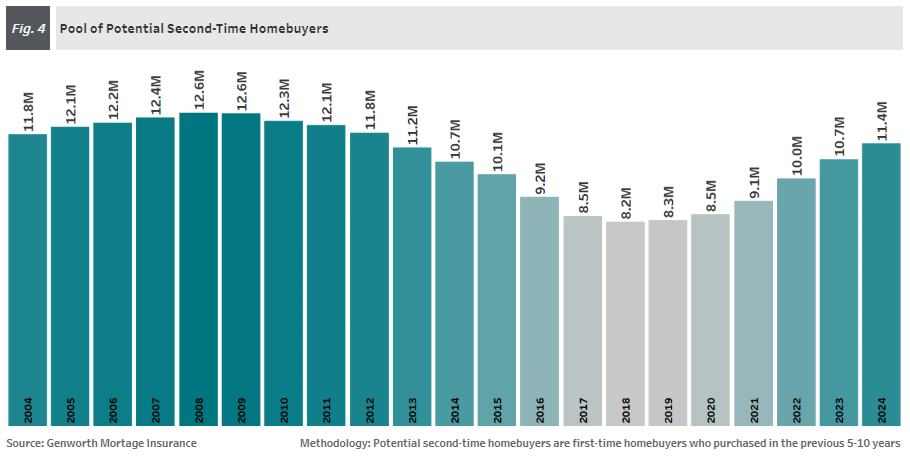 3. Over the past five years, first-time homebuyers have been moving to states with strong job growth and affordable homes.

[1] The housing affordability index from Moody’s Analytics is used here.  Values from 2018 are used here because they represent the most recent full-year available.

4. Low-down payment mortgages remain at the core of mortgage financing for first-time homebuyers. 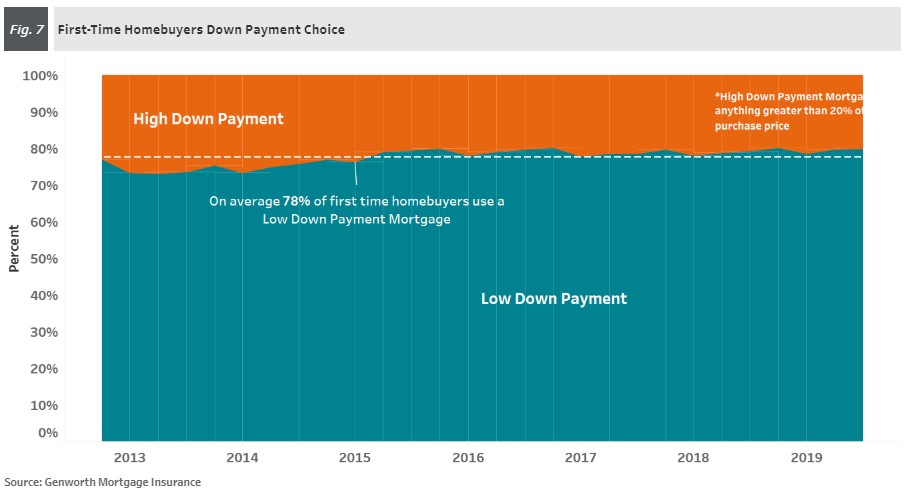 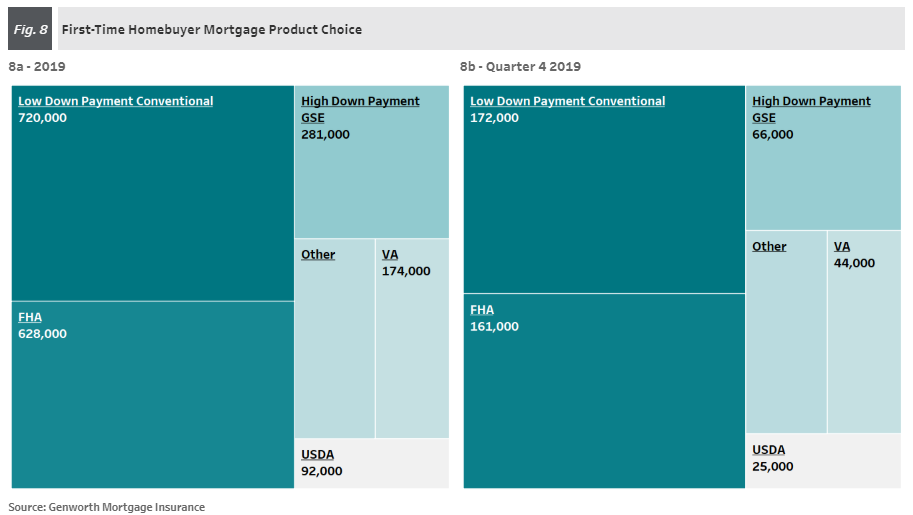 Demographics and a strong labor market have helped to create a boom in the first-time homebuyer market and a historically large market for low-down payment mortgages.  That boom in low-down payment mortgages also means an increase in the amount of credit risk in the housing finance system.  The tremendous market opportunity created by the larger Millennial generation, their transition into homeownership, their need for mortgage credit, and the increase in mortgage credit risk in the housing finance system are all connected.  As noted earlier regarding the potential rise of second-time homebuyers, the increased credit risk will likely be temporary as homeowners accumulate home equity.

More than any other factors, lower interest rates and slower growth in home prices have helped improve housing affordability in 2019.  Compared to a year ago, the Freddie Mac Primary Mortgage Market Survey® showed that the 30-year conventional mortgage rate has decreased by 108 basis points to 3.7%, while the interest rate for first-time homebuyers decreased by 114 basis points to 3.9%, the lowest level since Q4 2016 (Figure 9).  The lower rates have meant significant savings for first-time homebuyers.  On a $250,000 loan with a 30-year term, a 114 basis points decrease in interest rate means a monthly savings of $169, a very significant increase in housing affordability. 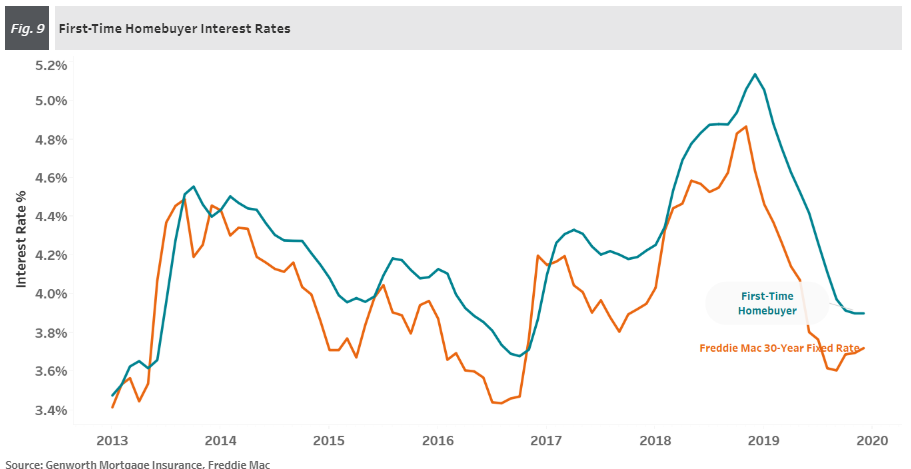 In addition to lower mortgage rates, housing affordability also improved as homebuilders began to address the large market opportunity in the affordable housing market segment.  For example, the fastest-growing segment for new homes in 2019 are those priced between $200,000 and $250,000, which increased by 30 percent in one year.  More broadly, building activity expanded by 16 percent in the $200,000 to $400,000 price range, leading to the fastest growth in new homes sold since 2016.  The increased supply is expected to shift home sales to new construction and reduce the inventory pressure in the previously owned market and pressure on home prices.  The year-over-year growth rate in home values, based on the Federal Housing Finance Agency’s Purchase-Only Index, was unchanged at 4.9% in Q4 compared to Q3.  Quarter over quarter, home values were up slightly.  As a result, total mortgage payment decreased by eight percent from a year ago (Figure 10). 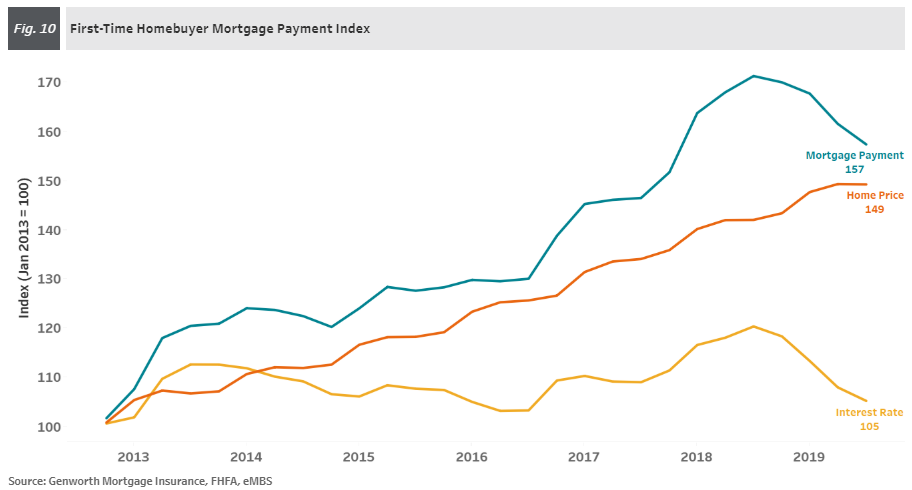 The first-time homebuyer market enjoyed a strong quarter and a historically strong year.  For the third consecutive year, the number of first-time homebuyers exceeded 2 million, unprecedented in the past 26 years.  This is a tremendous market opportunity for the entire housing industry.  Many in the homebuilding industry are actively expanding housing supply to address this opportunity, while on the financing front, the private mortgage insurance industry is supplying mortgage credit and taking on the credit risk.

Tian Liu has served as Chief Economist for Enact Mortgage Insurance Corporation since 2014. He is responsible for tracking and analysis of U.S. and regional economic conditions. He authors the company’s Weekly Economic Report and provides regular updates on housing and mortgage markets.

Mr. Liu began covering the U.S. housing market in 2007. His commentary on the housing market has appeared in the Wall Street Journal, New York Times, CNBC, Washington Post, and other notable publications.

Enact Mortgage Insurance, an operating segment of Genworth Financial, Inc. (NYSE: GNW), is headquartered in Raleigh, North Carolina, and operates in all 50 states and the District of Columbia. Enact Mortgage Insurance works with lenders and other partners to help people responsibly achieve and maintain the dream of homeownership by ensuring the broad availability of affordable low down payment mortgage loans. Enact has been providing mortgage insurance products and services in the U.S. since 1981.

Opinions, analyses, estimates, forecasts, and other views included in these materials are those of Tian Liu, are based on current market conditions and are subject to change without notice, do not necessarily represent the views of Enact or its management, and should not be construed as indicating Enact’s business prospects or expected results. Neither Tian Liu nor Enact guarantees that the information provided in these materials is accurate, current, or suitable for any particular purpose. Forward looking statements should not be considered as guarantees or predictions of future events.