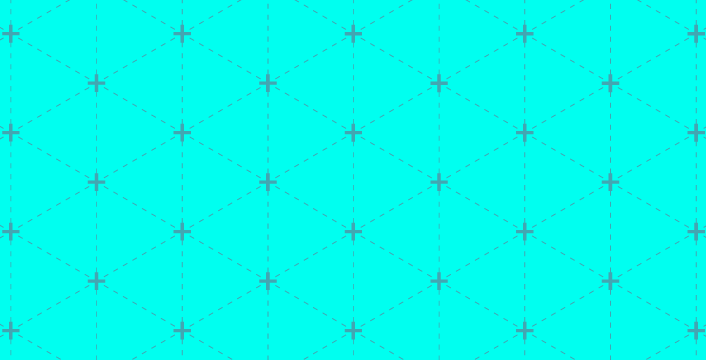 This edition of the First-Time Homebuyer Market Report covers three trends in the first-time homebuyer market in Q2’19.

Second, housing affordability continued to improve, driven mainly by falling mortgage rates, but also was supported by faster wage growth and falling home price growth. While falling mortgage rates are the result of higher economic uncertainties, and could negatively affect buyer confidence, they are still a net positive for the housing market in Q2.

Third, low down payment mortgages[1] remain at the core of mortgage financing for first-time homebuyers, who continue to shift away from government loan programs toward conventional loans with low down payments.

1. No quick rebound in the first-time homebuyer market.

In the past three quarters, overall home sales and sales to first-time homebuyers have slowed. First-time homebuyers purchased 559,000 single-family homes in Q2, down four percent from a year ago (Figure 1). This represents a shift in the housing market dynamic dating back to 2012. 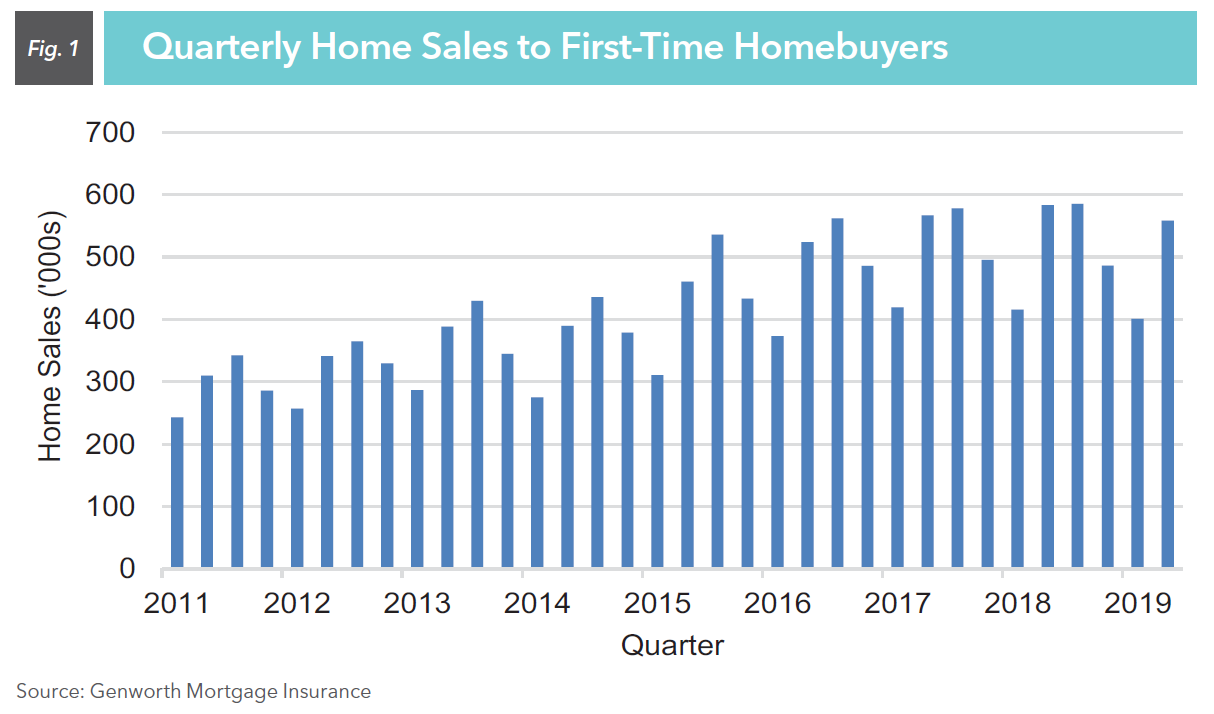 Removing the seasonality from the housing market data, home sales to first-time homebuyers declined by three percent from Q1 to a seasonally adjusted annual rate of 1.94 million units (Figure 2).  Sales of single-family homes were flat during the same period. Due to improved housing affordability, the housing market has seen a moderate rebound since Q4, with overall sales up four percent.  However, sales to first-time homebuyers have not seen a rebound, declining by six percent since Q4. 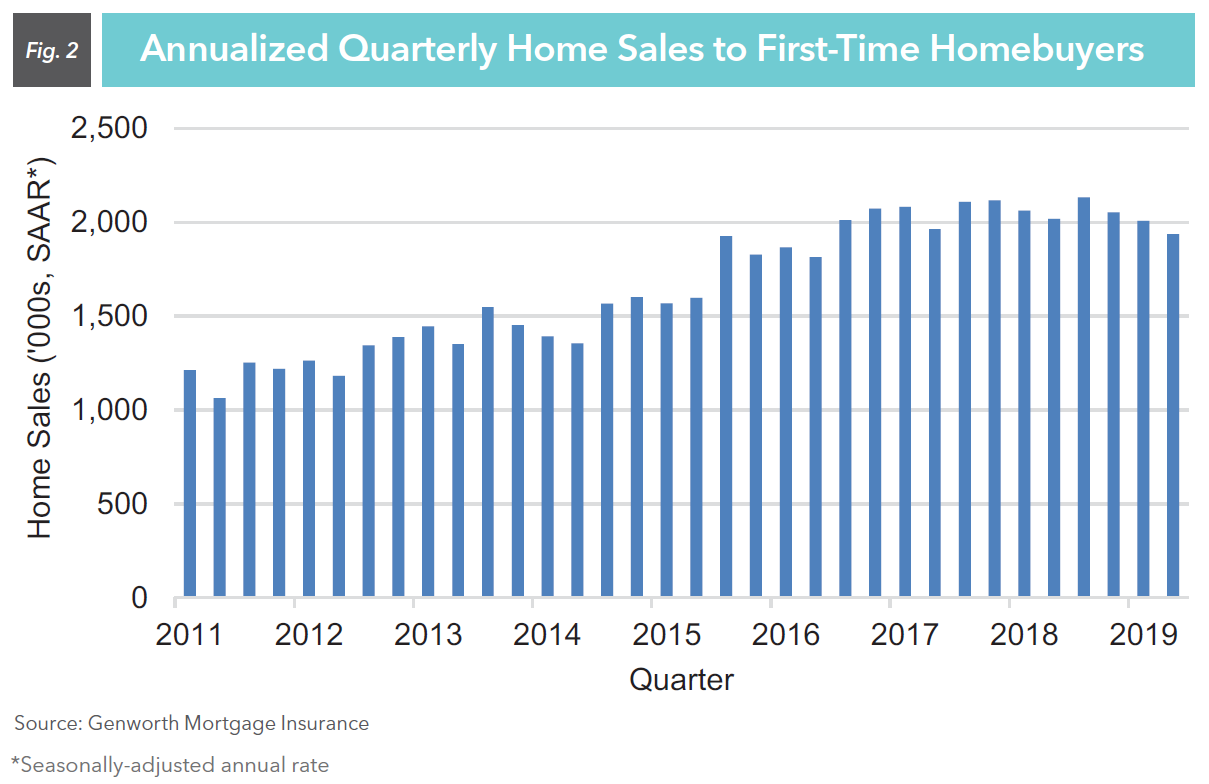 Home sales to first-time homebuyers declined by 3% from Q1 to a seasonally adjusted annual rate of 1.94 million units. 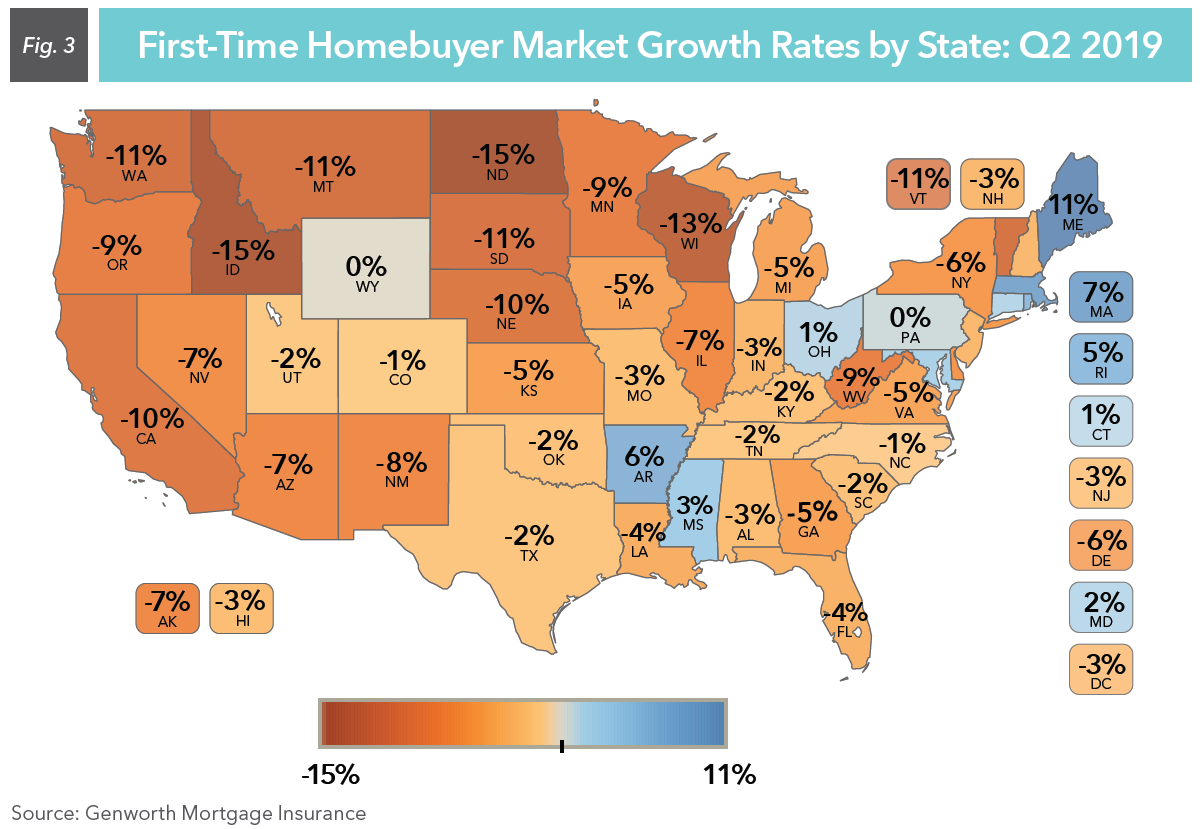 First-time homebuyers continue to represent a large part of the activities in the housing market. In Q2, they represented 36 percent of all buyers in the single-family housing market and 55 percent of new purchase borrowers (Figures 4 and 5). 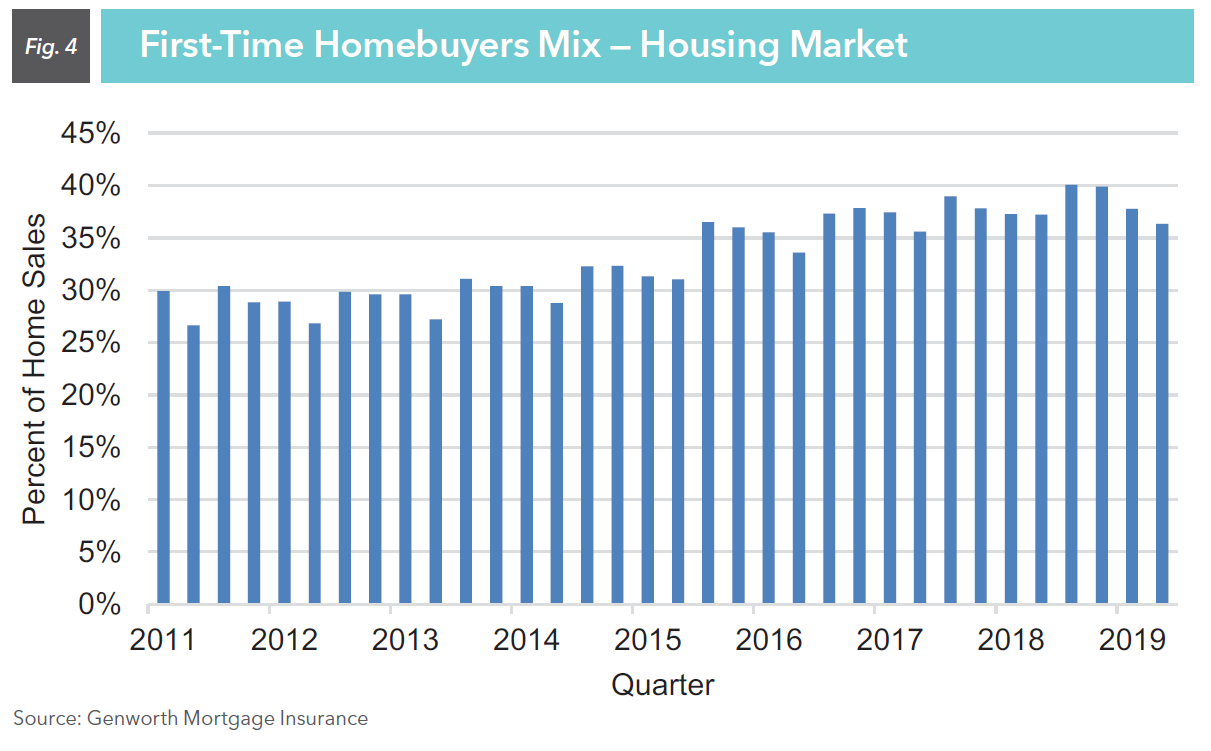 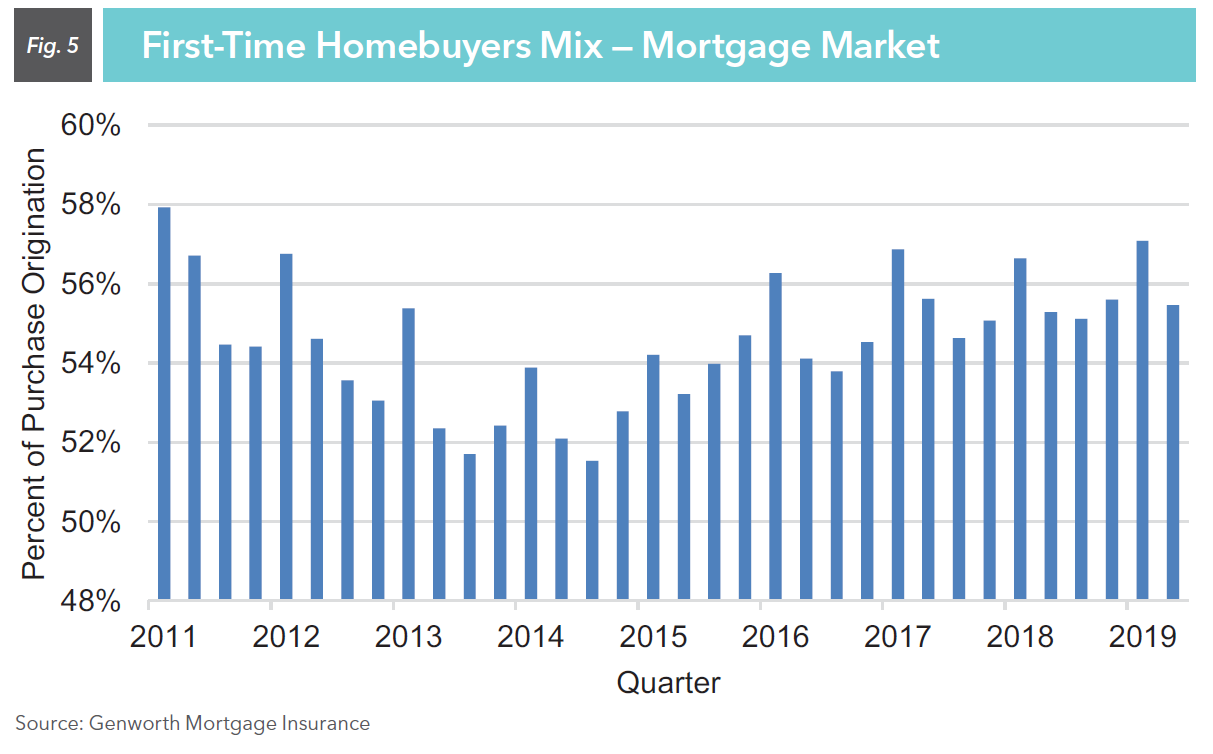 Compared to Q1, first-time homebuyers have seen mortgage rates come down by 39 basis points. The 50 basis point gap between these two measures of interest rate is largely the result of timing. First-time homebuyers who locked in rates in Q2, but closed in Q3, will likely see lower rates and further reduction in monthly mortgage payments. 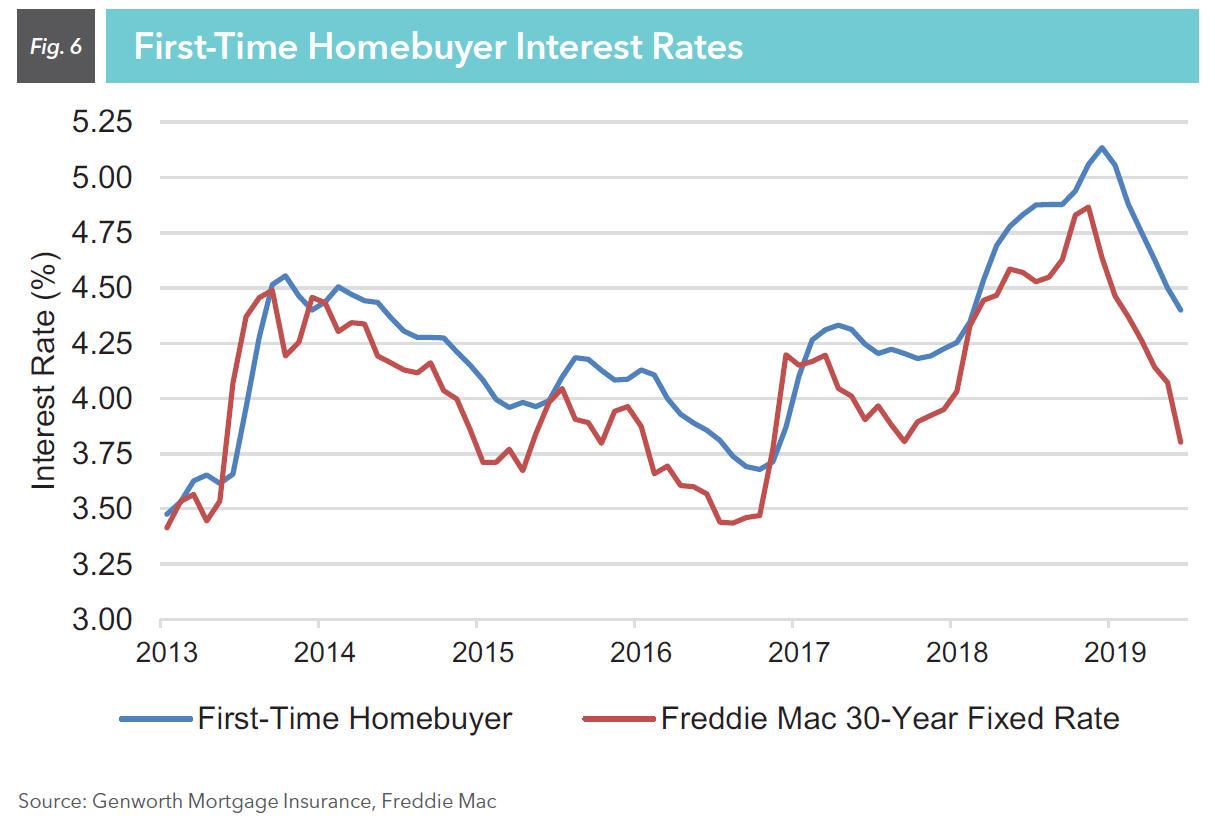 The interest rate for first-time homebuyers decreased by 39 basis points to 4.51% in Q2.

The year-over-year growth rate in home values, based on the Federal Housing Finance Agency’s Purchase-Only Index, slowed to under five percent in May compared to 5.1 percent in Q1. Quarter over quarter, home values increased, but the size of the increase was minor compared to the lower rates, resulting in a two percent decrease in mortgage payments (Figure 7).

Compared to a year ago, mortgage payments were up two percent, representing the slowest pace of increase since 2016. More importantly, income grew faster than mortgage payments, leading to improved housing affordability. 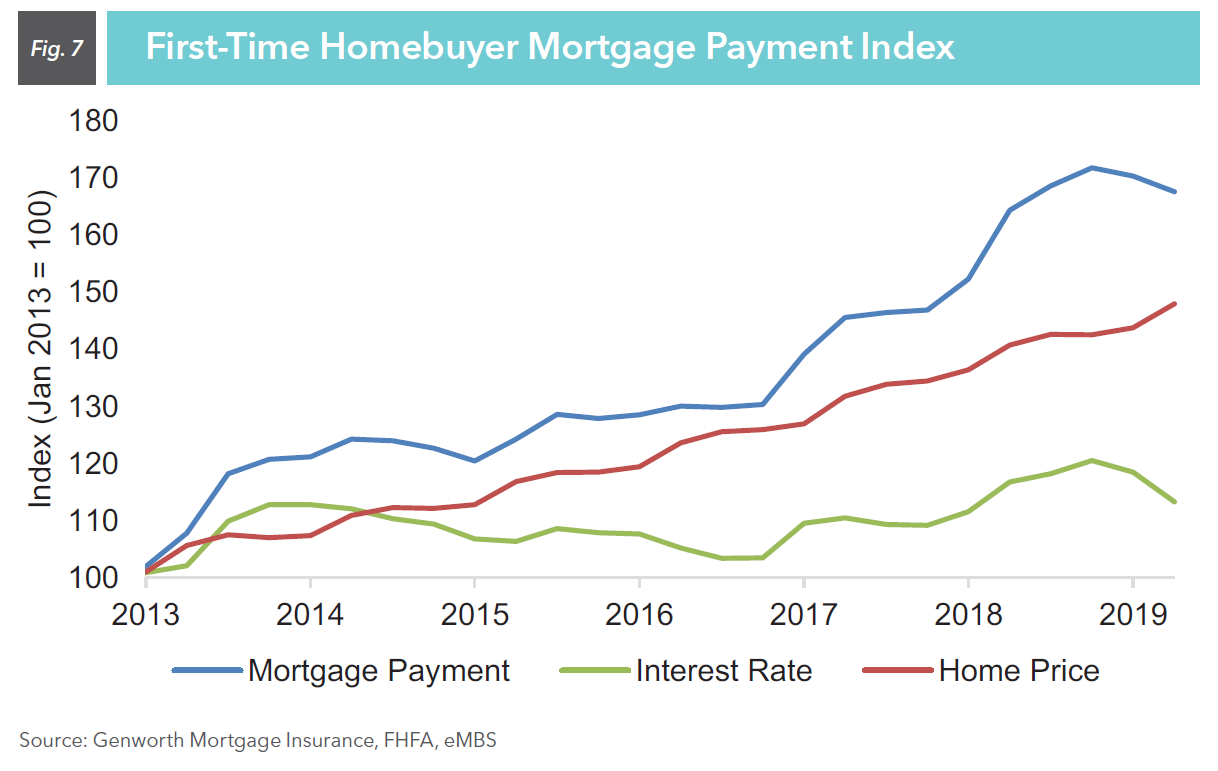 A slowdown in home price growth and falling interest rates helped to lower mortgage payments for first-time homebuyers in Q2.

Low down payment mortgages are a critical mortgage solution for first-time homebuyers, and are at the core of the mortgage industry. 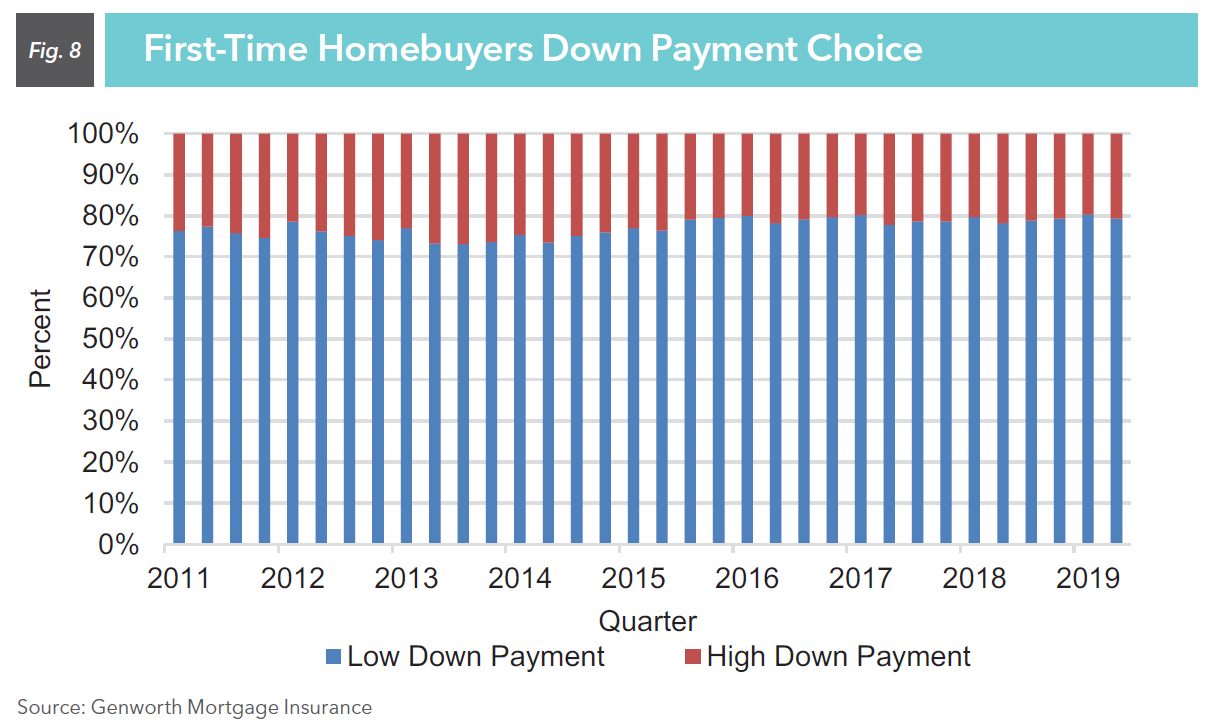 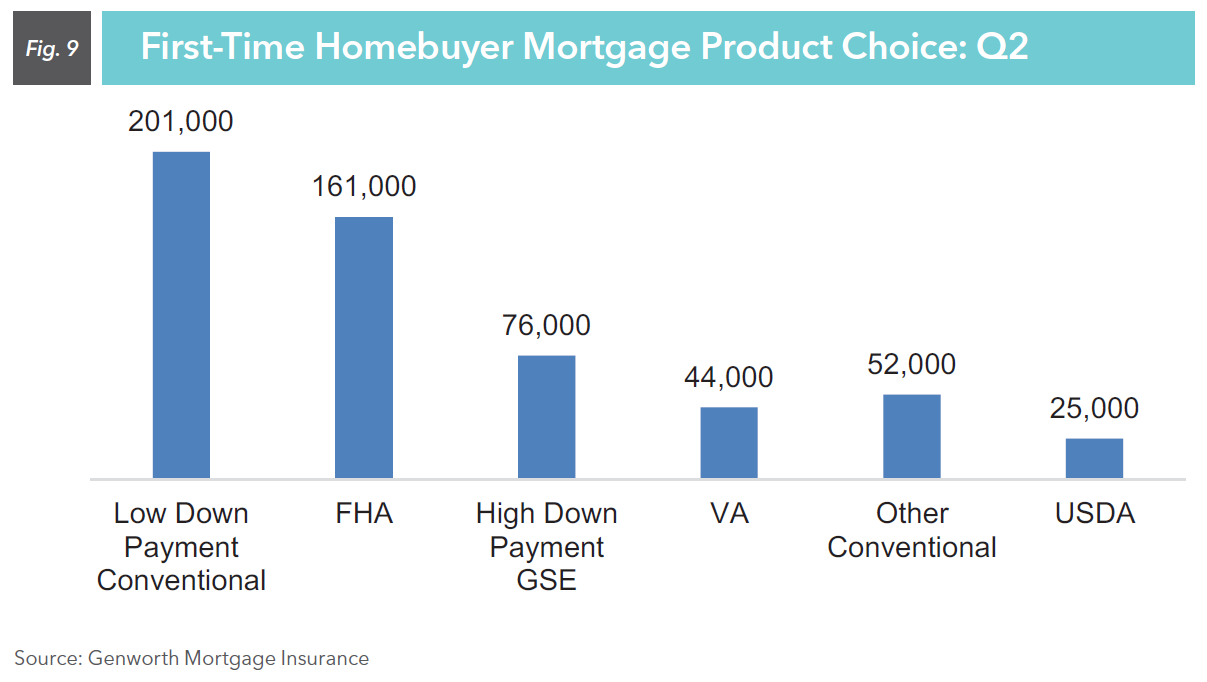 Low down payment conventional mortgages enabled by the private mortgage insurance industry helped 201,000 first-time homebuyers in Q2 – more than any other product.

The improving housing affordability is a promising development that should make it more attractive for potential first-time homebuyers entering the market, especially in an environment of rising economic uncertainty. Access to low down payment mortgages remains at the core of mortgage financing for first-time homebuyers, and the success of private mortgage insurance in the past few years shows that private capital can play a bigger role in housing finance and support homeownership.

Tian Liu has served as Chief Economist for Enact Mortgage Insurance Corporation since 2014. He is responsible for tracking and analysis of U.S. and regional economic conditions. He authors the company’s Weekly Economic Report and provides regular updates on housing and mortgage markets.

Mr. Liu began covering the U.S. housing market in 2007. His commentary on the housing market has appeared in the Wall Street Journal, New York Times, CNBC, Washington Post, and other notable publications.

Enact Mortgage Insurance, an operating segment of Genworth Financial, Inc. (NYSE: GNW), is headquartered in Raleigh, North Carolina, and operates in all 50 states and the District of Columbia. Enact Mortgage Insurance works with lenders and other partners to help people responsibly achieve and maintain the dream of homeownership by ensuring the broad availability of affordable low down payment mortgage loans. Enact has been providing mortgage insurance products and services in the U.S. since 1981.

Opinions, analyses, estimates, forecasts, and other views included in these materials are those of Tian Liu, are based on current market conditions and are subject to change without notice, do not necessarily represent the views of Enact or its management, and should not be construed as indicating Enact’s business prospects or expected results. Neither Tian Liu nor Enact guarantees that the information provided in these materials is accurate, current, or suitable for any particular purpose. Forward looking statements should not be considered as guarantees or predictions of future events.

What You Need to Know About the MCC Tax Credit

Process Improvement for Your Mortgage Operations
Scroll to top